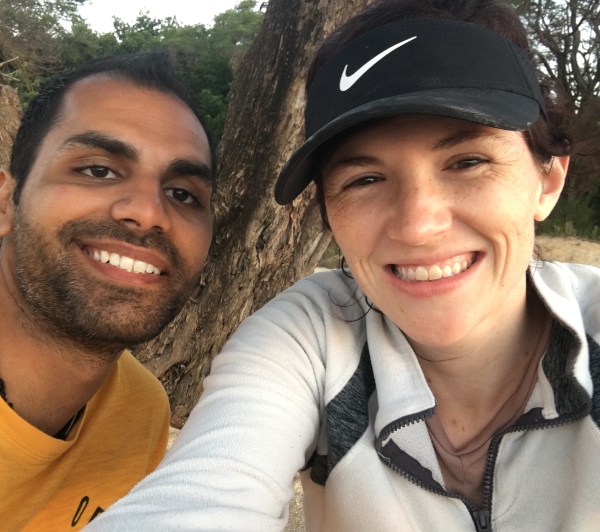 “Financial coaching brought us together, and we realized we both have positives to bring to the table in how we deal with money.”

After three years of marriage, Michaela Cross and Kapil Chugh were still living as “independent career people” – making separate financial decisions instead of joint ones.

After trying to combine their finances, they realized they wanted guidance on how to start. Michaela started watching Dave Ramsey videos on YouTube for advice.

The radio host and TV personality’s approach was helpful, but Michaela wanted a more hands-on, personalized guidance – making the couple a perfect candidate for financial coaching.

They found an ideal fit with Suzanne Ryan of T&H Financial Coaching, a Ramsey Preferred Coach.

“I felt like Suzanne understood our vision and what we wanted,” Michaela said.

Her husband, Kapil, was more hesitant, which is not unusual when starting financial coaching. But after talking with Suzanne, who was warm and personable on their first coaching call, he decided financial coaching was a wise move.

Together, Suzanne served as a “money therapist,” questioning their assumptions and teaching skills they can use on their own. A benefit was a shift in attitude and mindset, they said.

For example, Michaela said she would spend money as soon as her paycheck hit. And she falsely believed she could never pay off her student loan debt.

Meanwhile, Kapil is a natural saver – and the tension caused stress between the two.

“It was definitely rocky at first,” Michaela said of making joint financial decisions. But with coaching, practice, and time, each financial conversation became easier and more comfortable.

Today, the couple talks about money every week during “money dates,” and they now feel in control of their finances. Together, they’ve paid off all their credit card debt and doubled or even tripled some of their investments.

“Financial coaching brought us together, and we realized we both have positives to bring to the table in how we deal with money,” Michaela said.

Many couples who work with Suzanne realize the benefits of financial coaching extend past their bank accounts to their marriage. By working with a coach, they’re communicating and on the same page with the financial and personal goals. That builds a solid foundation for their future.